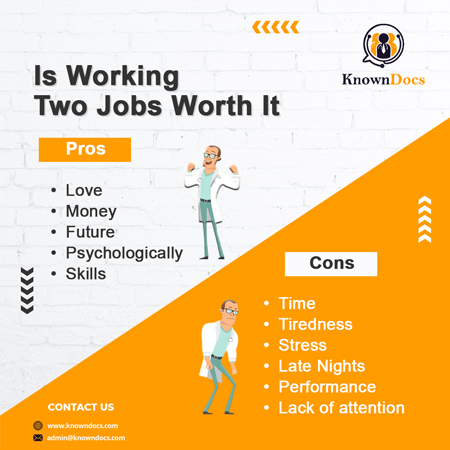 Is Working Two Jobs Worth It?

Although it seems to be a simple question that often comes to our minds who are working a 9-5 job. But, in reality, the dimensions of doing a second job are completely different. One has to consider many factors before starting a second job or commonly known as the part-time job.There can be many reasons for a man or woman tends to have a second job for himself or herself. These part-time jobs are the main source of earning. Furthermore, these part-time jobs bring in other benefits that you might want to have during a short period of time.

The majority of the people tend to have a second job to cover their expenses and make something extra every month so that they don't have to face problems in their life.

What is meant by the second job?

Many had their own versions when it comes to defining the very definition of a second job. In our words, when someone has spare time after his or her actual 9-5 job, and that particular individual is willing to generate money or expertise is called having a second job. This can be termed as the proper definition for the part-time or second job.

Why we need a second job

The important question that arises is why we need a second job in the first place?

This is the most important question that why we wanted to have the second job. The majority of the people tend to have a second job for the sake of financial support. As we know that paying utility bills, transportations, accommodations, other bills, and other off and on expenses that we face during the normal course of the day needs additional money.

And what might be the best solution for paying additional expenses to pay them in the first place rather than having a loan to pay. So this is the main reason apart from others, such as acquiring additional skills, consuming extra time, and getting rid of bad memories.

We tried the best to bring in the main reasons that let the people have the second job or the part-time job for themselves.

The main reason for doing a second job for most people is for the sake of money. Other requirements include additional time for a job, acquiring additional skills, or securing a second job to avoid uncertainty. We are going to explain a few of the common reasons for you to understand better.

This being the most common and in abundance reason that might tend you to have the second job. The majority of people wanted to have the additional money to support their families, paying their bills, and paying the loan they have taken from the bank for various reasons.

Furthermore, some people wanted to have a second job to fulfill their dreams. They either wanted to go to places or acquire an additional car, house, or other items that are considered luxury items when it comes to a commoner. They don't have the need to fulfill their basic necessities.

There are many individuals who like to have a second job so that they might be able to acquire additional skills that are considered necessary according to them for their future endeavors. This skill set allows them to grow in their professional career and excel in their basic 9-5 job that they are doing in the first place.

There are many people who do the second job so that they can have the perfect savings for their end. This allows them to have a handsome amount of money when they get older.

The majority of the people tend to have a second job so that they can achieve goals that they have set for themselves. This type of individuals don't have issues regarding their jobs or having issues when it comes to having expenses covered every month.

Additionally, these people like to have a car, house, college fee, marriage of their children or wanted to fulfill their dreams for going to the world tour after some time.

Pros And Cons Of A Second Job

There are Pros and cons of a second job that one has to determine according to it. Here is the pros section that will bring in the positive points in front of you.

Everyone loves to acquire additional skills and wanted to hone their skills. Apart from honing your skills, there might be a possibility that you wish to fulfill your hobbies that you love the most. You find that you have additional time to utilize in fulfilling while doing the second job.

Furthermore, these type of people likes to have their extra time spend on some productive work, and that work brings in some additional cash as well.

The second most important aspect of doing the second job is money. There is no doubt about working in the additional hours of the day to earn a little more when compared to what you are earning from your 9-5 job.

This additional amount that you will earn allows you to pay your additional bills and fulfill your dreams for achieving the goals you have set for your life.

Doing a second job might help you get the additional skills that might help you in the future. As we all know that we live in a world where nothing is permanent. In this way, a professional can secure the future if he finds his first 9-5 job is not getting him to places that he wanted to acquire in his life.

Doing a second job might help you in psychological terms as well. This second job might bring in the freedom of thoughts that might get you strangled when the progress is a little slow and not up to the mark. Furthermore, you have the freedom that you are not stuck with the same job, and there is always a second option there for you to switch the job.

As discussed earlier in the article that skills are the main aspect that determines your success in the world. If you have multiple skills set, you are better positioned to bargain a better deal when it comes to having the perfect job for you. These skills give you have the best options when it comes to money and position or both.

There are a few constraints that you might face while working on the second job that you have. These constraints are elaborated under the heading of cons for you.

Working on two jobs consecutively brings in additional tiredness for you. As you might find yourself exhausted and tired to the level, it also hurts you physically and psychologically.

Consecutive jobs bring additional stress to you. Additionally, you have to keep concerned about the factors you are going to face in both jobs. Normally people tend to have the stress level of the job, and when it comes to you when you are working on two consecutive jobs, that might be made you under constant stress.

Doing the second job might end up working for late hours. This means that you are going to sacrifice your health and sleep while working on the second job. Late-night workings might hit you psychologically and brings in additional stress to you as well.

Working for the two jobs might hit your performance as well. You won't be able to concentrate, which affects the quality of work required by you on both of your jobs. Additionally, your performance will also tend to have severe effects on the performance.

This lack of attention is another key aspect you need to consider while working on two jobs. You tend to have thoughts in your mind all the time when it comes to working on the first job or the second job. You always have tension and thoughts regarding the work, and in this way, you won't be able to concentrate or pay full attention to the work.

As we have tried our best to bring in all the relevant information regarding is working two jobs worth it. The pros and cons have also been elaborated for you to consider. But in the end, everyone knows the issues and problems that they are facing. So it would be completed upon your discretion whether you wanted to have the second job or not.

We would recommend that you must have a second job. But always keep in mind that it does not come with the cost of your health and mental wellbeing.